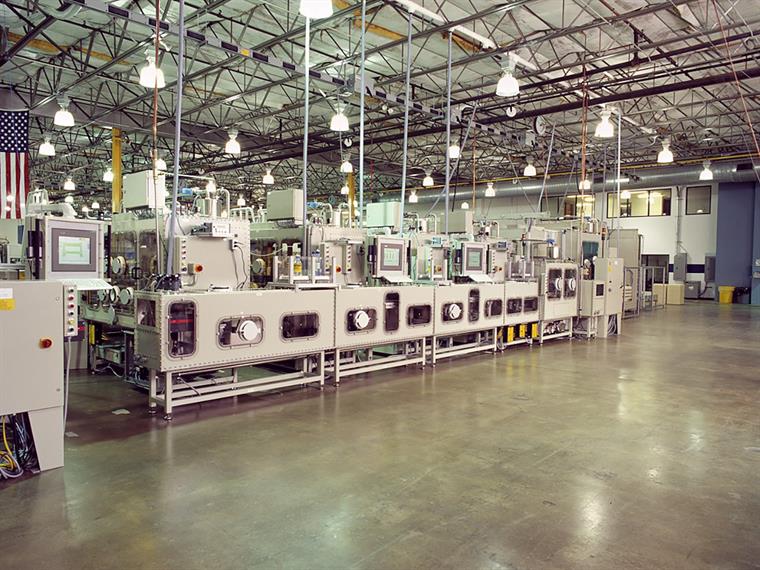 The customer was in need of  a system that was able to produce contact lenses in an oxygen-free environment. The challenge was to introduce carriers, along with mold halves, into a production environment that has an oxygen content of 200ppm or less while maintaining a cleanliness rating of Class 1000. Liquid dispensation, component transportation, and all related processes had to be done within this controlled environment, while all preventative maintenance had to be performed from outside it.

Contact lens mold halves enter the system, rotate 180º, and slide forward to be loaded onto carriers by a robot. The pallet moves to the next station, and enters an entrance airlock. After the entrance door is sealed, the airlock is evacuated and backfilled with nitrogen. The airlock exit door opens, and the pallets are released into the See3 system’s environmental enclosure, also filled with nitrogen. At the cap and fill station, pick and place grippers pick the two base-curve mold carriers from the pallet, and place them where two dispensing heads fill all 16 molds. The front-curve carriers on the pallet lock together with the base-curve carriers. The pallet is then released into an ultraviolet curing station. A multi-position pick and place removes the pallet from the carrier, and the pallet travels down the conveyor to the exit airlock. The carriers enter the curing oven. After this, they arrive at the operator position, where the finished lenses are removed from the system.
Download

We delivered a system, which not only met the stringent production requirements, but exceeded them. The O2 levels could be held to 50ppm while the machine was in full operation. Strict quality control tests verified the cleanliness aspect, as well. This system was brought in on time, on budget, and was capable of manufacturing products of the highest caliber.
Contact Lens Production System Exceeds Strict Customer Requirements
Industry
Consumer Products Life Sciences
Technical Capabilities
Assembly Solutions Inspection & Testing Material Handling Solutions Plastics Processing Robotics Integration
Region